The energy costs of the pipeline-linked energy sources are made up together from the costs for the commodity (including its refinement), the costs for its transport, as well as taxes and other levies or surcharges.

The energy transition, and other legislative influences of recent years, have especially influenced the taxation situation. These include the expansion of renewable energy, the electricity and energy tax, the trade in emissions, the promotion of Cogeneration (CHP) systems and grid expansion. These developments have led to the situation where the share of taxes and delivery costs, especially in the electricity sector, is currently over 50% for many companies. In particular, for the companies in the manufacturing sector, this development has led to a continuous increase in energy costs despite considerable efforts and investment in energy efficiency and continuous improvements in energy purchasing.

The graphs below show the development of the tax and surcharge burden on electricity, on the basis of a fictitious company, with an electricity consumption of about 5 million kilowatt hours in the period from 2009 to 2022. 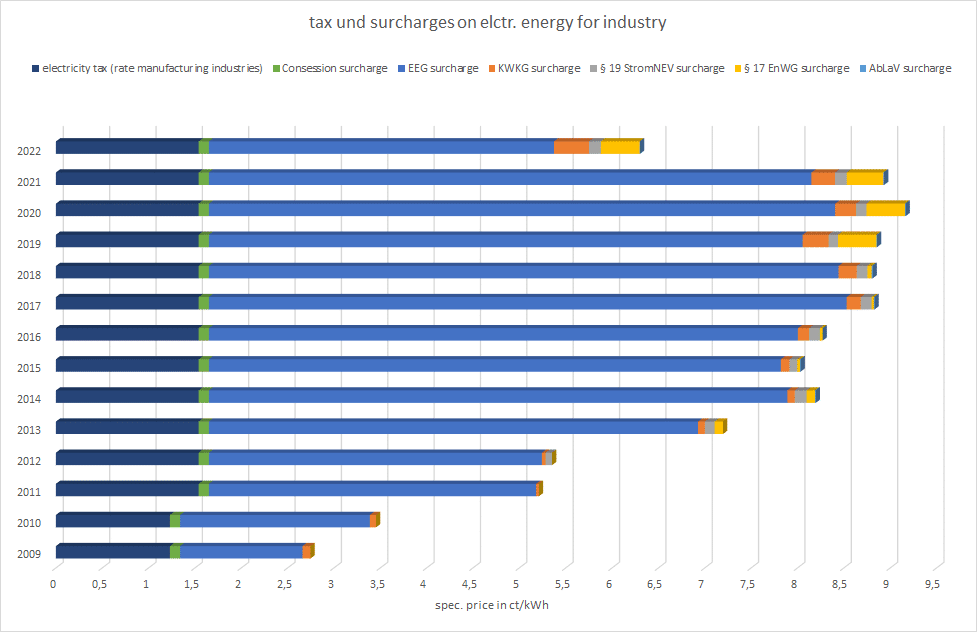 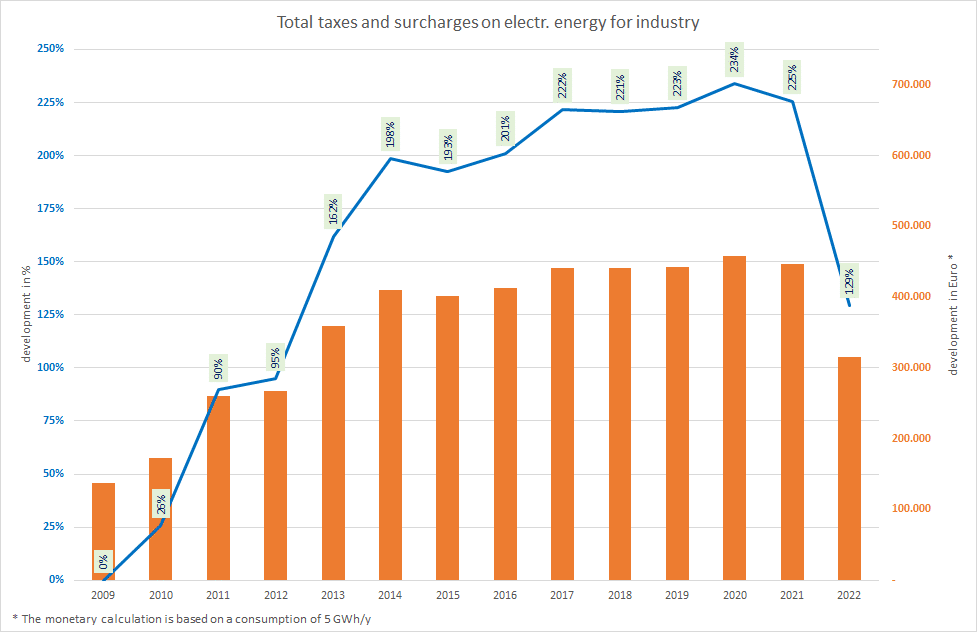 For the tax burden, and nearly every surcharge, there are appropriate reimbursement or reduction options which can significantly lower your costs. Furthermore, the continual changes in the legal and/or official conditions for obtaining a reimbursement, requires a constant updating of the know-how. The statutorily or officially fixed deadlines for applications emphasise the need for organisation of the optimization potential in this area.

We check, with your close cooperation, your personal refund possibilities and support you with the possible contract application. In the last few years, the EN-Concept team, together with the customers, has been able to realize reimbursements or reductions up to a three-figure million amount.

Electricity and energy products such as natural gas, coal or mineral oils, are subject to a fixed tax rate. These are so-called consumption or quantity taxes. The legal basis can be found in the Electricity Tax Act [StromStG] and in the Energy Tax Act [EnergieStG]. The electricity tax as well as the surcharge on the energy tax (named the mineral oil tax until 2006) is also referred to as the “eco-tax”. The so-called ecological tax reform was introduced in 1999.

We examine, together with our customers, all options for reducing the electricity and energy tax burden. We also ensure that the deadlines for submitting refund applications are met.
Furthermore, some reimbursements require an energy management system. See also Management systems.

In the years 2013 and 2014, the EU Commission revised the rules on the admissibility of state subsidies. Thus, the legality of granting relief is linked to publication-, information- and transparency obligations which have been in effect since July 1st 2016. We support you in the timely reporting of the relevant relief cases.

The promotion of renewable energy forms (the energy transition) has increased considerably in its complexity since 2000. The legal tax alone has increased more than ten-fold. The development of costs for the promotion of renewable energies, as well as state aid requirements on behalf of the EU Commission, have also led to a considerable amendment frequency. The EEG surcharge is, in the meantime, responsible for nearly 30% of the electricity costs.

The very special compensation scheme enables electricity-intensive customers to reduce this burden considerably. In addition to the railway companies, companies from areas of the manufacturing industry are eligible to apply.

We check, in close consultation with our customers, the application requirements and accompany, or organize, the corresponding application. On our client’s request, we take over further communication with the Federal Office for Economic Affairs and Export Control (BAFA).

Reduction of the CHP (KWK)-Surcharge

Since 2017, the surcharge under the Act on Energy-Cogeneration for energy-intensive companies is limited to 15% or 20% of the KWK surcharge, if the electricity volume exceeds 1 GWh. A reduced KWK surcharge is granted to companies that are privileged under the special compensation scheme of the EEG.

Together with you, we examine to what extent the reduction of the KWK surcharge within the framework of the special compensation scheme is possible and accompany the later implementation of the reduced billing.

Companies in the manufacturing industry can reduce their costs through §19 StromNEV-surcharge as well as §17 EnWG-surcharge, if it is proven that the legal basis of the energy intensity is fulfilled.

Together with you, we examine the extent to which these requirements have been met and accompany the required application for a reduction of the aforementioned apportionment.

The concession fee is a payment which is payable to towns and municipalities as compensation for the use of public land for the installation of electricity and natural gas pipelines.

In the case of special contract customers, the fee amounts to 0,11 ct/kWh in the electricity sector and 0,03 ct/kWh in the natural gas sector. For a natural gas consumption level of more than 5 GWh, the concession fee is waived in full.

The distributors of fuels must participate in an emissions trading system and pay the CO2 levy. The amount of the levy is determined from the CO2 price set by law and the CO2 emission factor. The revenues from the BEHG are to be used to reduce or stabilise the levy burden on electrical energy and to increase the commuter allowance.

The German Emissions Trading Authority at the Federal Environment Agency is responsible for enforcing the BEHG and plans to provide relief for particularly affected companies in the future through the BEHG Carbon Leakage Ordinance (BECV).